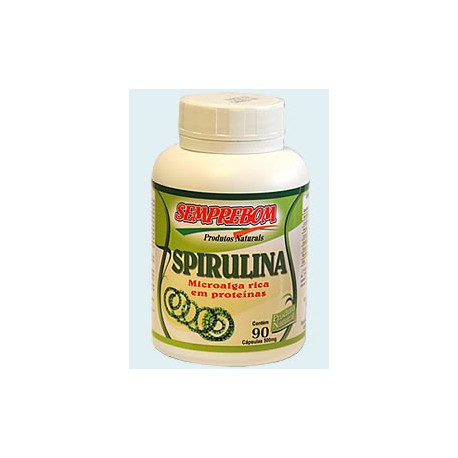 Spirulina is a type of blue-green algae that is rich in protein, vitamins, minerals, and carotenoids (a type of antioxidant that can help protect cells from damage). It contains nutrients, including B complex vitamins, beta-carotene, vitamin E, manganese, zinc, copper, iron, selenium, and gamma linolenic acid (an essential fatty acid).

Spirulina -- like any blue-green algae -- can be contaminated with toxic substances called microcystins, and can also absorb heavy metals if any are present in the water where it is grown. For these reasons, it is important to buy spirulina from a trusted brand.

Test tube and animal studies suggest spirulina may boost the immune system, help protect against allergic reactions, and have antiviral and anticancer properties. However, there is no proof that spirulina has these, or any, benefits in humans. More research is needed to fully understand how or whether spirulina benefits people.

A number of animal and test tube studies suggest that spirulina increases production of antibodies, cytokines (infection fighting proteins), and other cells that improve immunity and help ward off infection and chronic illnesses such as cancer. However, it has not been tested in humans. In one clinical trial that involved humans, another type of blue-green algae called chlorella did not boost the immune response to flu vaccine.

Amino acids make up 62% of spirulina. Because it is a rich source of protein and other nutrients, spirulina has been used traditionally as a nutritional supplement. However, although spirulina contains a significant amount of protein, you would need to consume very large quantities to see any effect. Other sources of protein, such as nuts, legumes, whole grains, and meat, provide more efficient nutrition.

Animal and test tube studies suggest that spirulina may protect against allergic reactions by stopping the release of histamines (substances that contribute to allergy symptoms, such as a runny nose, watery eyes, hives, and soft-tissue swelling). But whether these preliminary studies will have any benefit for people with allergies is not known.

Although antibiotics destroy unwanted organisms in the body, they may also kill "good" bacteria called probiotics (such as Lactobacillus acidophilus), sometimes causing diarrhea. In test tubes, spirulina has enhanced the growth of L. acidophilus and other probiotics. More research is needed to determine whether spirulina will have the same effect in people.

Test tube studies suggest that spirulina has activity against herpes, influenza, and HIV. But whether this laboratory finding will translate into any benefit for people is not known.

In one placebo-controlled study, taking spirulina seemed to reduce a precancerous lesion known as leukoplasia in people who chewed tobacco. Lesions were significantly more likely to disappear in the spirulina group than in the placebo group. More research in this area is needed.

Preliminary evidence suggests that spirulina may help protect against liver damage and cirrhosis (liver failure) in those with chronic hepatitis. Without more research, however, it is impossible to say whether spirulina offers any real benefit.

Spirulina is a microscopic algae that flourishes in warm climates and warm alkaline water. It is available dried and freeze-dried.

Spirulina is available in pill or powder form, or as flakes. Most of the spirulina consumed in the United States is grown in a laboratory. There are many different spirulina species, only some of which are identified on labels of commercially available products. Spirulina maxima (cultivated in Mexico) and Spirulina platensis (cultivated in California) are the most popular.

How to Take It:

Although spirulina has been used in children, the safe and effective dose for those under 18 has not yet been established. Don't give spirulina to a child without talking to your doctor first.

Consult a health care provider to determine the right dosage for you. A standard dose is 4 - 6 tablets (500 mg each) per day.

Because of the potential for side effects and interactions with medications, you should take dietary supplements only under the supervision of a knowledgeable health care provider.

Spirulina appears safe, even at high doses. However, it can be contaminated with other substances that can be toxic. It is important to buy a reputable brand of spirulina.

If you are pregnant or breastfeeding, talk to your doctor before taking spirulina.

If you have an autoimmune disease, such as multiple sclerosis, rheumatoid arthritis, or lupus, you should avoid spirulina as it could stimulate your immune system and make your condition worse.

There are no reports in the scientific literature to suggest that spirulina interacts with any conventional medications. However, it is possible that spirulina might interfere with drugs given to suppress the immune system, including: