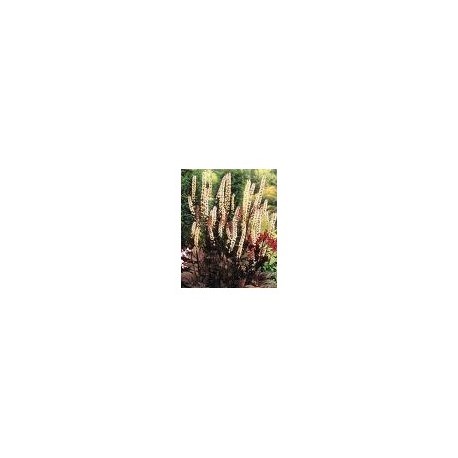 Black cohosh is a traditional remedy of the North American Indians where it was used mainly to treat women's problems, especially painful periods and problems associated with the menopause. A popular and widely used herbal remedy, it is effective in the treatment of a range of diseases. The root is alterative, antidote, antirheumatic, antispasmodic, astringent, cardiotonic, diaphoretic, diuretic, emmenagogue, expectorant, hypnotic, sedative, tonic and vasodilator It is harvested in the autumn as the leaves die down, then cut into pieces and dried. The root is toxic in overdose, it should be used with caution and be completely avoided by pregnant women.

It is used in the treatment of rheumatism, as a sedative and an emmenagogue. It is traditionally important in the treatment of women's complaints, acting specifically on the uterus it eases uterine cramps and has been used to help in childbirth. Research has shown that the root has oestrogenic activity and is thought to reduce levels of pituitary luteinizing hormone, thereby decreasing the ovaries production of progesterone.

The root is also hypoglycaemic, sedative and anti-inflammatory. Used in conjunction with St. John's Wort (Hypericum perforatum) it is 78% effective in treating hot flushes and other menopausal problems. The roots are used to make a homeopathic remedy. This is used mainly for women, especially during pregnancy.